53 replies to this topic

There are various lists of "Best Albums of the 2000s" starting to appear. The Guardian rates Back to Black as #6. I thought the article was well-written. As for the last sentence- who knows what the future holds.

Albums of the decade No 6: Amy Winehouse – Back to Black

If this was the decade in which celebrities bared all, then Winehouse managed to save her dark side for the music, combining misdemeanour with melody, scandal with soul. 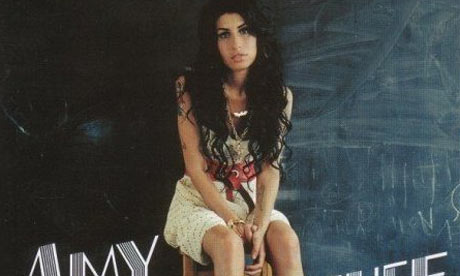 Amy Winehouse opened her second album stating defiantly that she wasn't going to rehab – no, no no – then spent the next nine songs documenting why a spell of rest and recuperation might not be such a bad idea after all.

If this was the decade in which celebrities bared all – thanks to websites, cameraphones, the pages of Heat – then Back to Black was its musical equivalent, spilling gin-soaked tales of heartbreak, drugs and depression like they were going out of fashion. You Know I'm No Good has our heroine crying on the kitchen floor, enduring tedious sex and getting caught by a lover with tell-tale carpet burns … and that's just in the space of three minutes.

Back to Black spoke a street-smart, noughties language (from scoffing "chips'n'pitta" to opening lines as gobsmacking as "He left no time to regret/Kept his dick wet"), but it was Mark Ronson and Salaam Remi's faithful 1960s Motown stylings that eased such tough tales into the living rooms of millions. Critics will argue that Back to Black is a coffee-table album – shamelessly retro, lacking in musical innovation. But its strengths were never about tearing down sonic boundaries. This was articulation of an inner pain to rival that of her idols – from Billie Holliday to Sam Cooke – sang with an authentic soul voice that had the strife of a collapsing relationship etched across it. Put simply, the only thing Back to Black had in common with a coffee table was an edge.

This edge was to be Winehouse's downfall. In a tragic case of life imitating art, she ended up living out the worst aspects of Back to Black's subject matter, stumbling around Camden to the glee of websites, cameraphones and, indeed, those pages of Heat. But during the recording of the album, Winehouse managed to save her dark side for the music, combining misdemeanour with melody, scandal with soul. That she will ever pull off such a dazzling highwire dance again – to come back from black, as it were – seems a sadly distant hope.

No sweeter song, no heart so true

This short bio of Amy on her website is pretty well-written too.

North Londoner Amy Winehouse first burst to prominence in October 2003, aged 20, with her universally acclaimed, platinum-selling debut Frank. That record was her grand and suitably blunt-speaking break-up record, sometimes a little bitter, with a maturity in the vocal delivery that was never less than sweet.

Frank won Amy a battalion of fans around the world and marked her out as one of pop's most distinct new songwriters; confessional, elemental and with that rarest of combinations: humour and soul. Amy had cut through to the core of the human condition with her debut, adding her own jazzy witticisms to the legacy of the greats.

Three years later, in October 2006, she followed it up with the astonishing Back To Black, a record which channelled the girl groups of her fancy but placed them slap bang into the middle of modernity, with a little help from producer Mark Ronson. If that album's brazen confessionals charted Amy's progression from girlhood to womanhood, it also propelled her from critics' darling to bona fide global pop phenomenon.

Powered by a stunning array of loosely strung, funk-inflected joints including Rehab, You Know I'm No Good and Back To Black, the album won Amy countless awards, including Brits, Ivor Novellos and an incredible five Grammy Awards. It also made her one of a very select band of UK artists to sell more than 10 million copies of an album.

Now, as the sun sets on the noughties, Amy's working on ideas for her third album. We don't yet know how its songs will sound, or what its lyrics will say. But, rest assured that it will, once again, make the world sit up and listen.

Thanks for the articles. The album definitely deserves the title.

Back To Black, the single, comes in at #61 on NME's Top 100 of the Noughties. I would rate it much higher, but I'm glad to see it in there as it's my favourite Winehouse single. Bear in mind it's a very male, white, middle-class 'indie' mag - they didn't get Frank at all.

And I was quite amused by all the fuss about Crazy In Love topping the chart! Reminded me of when Noel Gallagher had a tantrum at Jay-Z for headlining Glastonbury, so this will no doubt pour salt on his wounds...

The darkest of heartbreak and the richest of voices

Rehab had the one-liner bellylaugh, but it was the title track to Amy Winehouse’s second album that really proved its depth and worth. Hard faced and broken-souled, its knowing wallowing spoke to anyone who’d ever had a bunnyboiler moment. It smoothly chronicled the lowest of lows (drawing on Winehouse’s first break-up with Blake Fielder-Civil) with unflinching, fierce frankness, couched by Mark Ronson’s most luscious of retro-soul deliciousness, all Dusty Springfield high drama and tear-streaked eyeliner. When Amy sings ”I died a hundred times” you know she isn’t talking about having a bit of a sniffle and an extra biscuit. EM

“I told you I was trouble” — and so it proved — but Winehouse’s second album is as close to an instant classic as any this decade. The true magic of this record is in the rich melodies, and lyrics full of busted love and dark humour.

It's amazing that critics all agree with the quality of Amy's work. I've never read a single bad critic to her music, honest. There probably are many but I couldn't care less. BTB IS a classic, and to me, Back to Black the song is simply the most amazing piece of heartbreaking soul I've ever listen to. But what can I say...the phrase it's inked on my right arm. Grrr! This is what people look like who think there were 5 better albums that B2B! I wouldn't trust him with a pizza order! History will shame him! FU, Mr Jonze! Grrr!

Ummmm - just so you know, he wasn't the guy that decided there were 5 albums better than Back to Black. Other journalists wrote about other albums, if you take a look at the complete list.

Yes, I knew that. I picked on him because he is "the music editor of guardian.co.uk." & because I'm sick of Amy's success being credited to her producers & because his all-time fav album is by Spiritualized & because his favorite subject seems to be Oasis & because he impresses me as an opportunistic weasel who doesn't really believe any of the nice things he wrote about Amy, but is parroting opinions of those who he recognizes to be miles above him in the hierarchy of the music biz & because I'm irked that The Guardian is off by 5 while R. Murdoch's Times is only off by 1 & because I didn't like his wise-ass name-dropping little bio:

Instead of a career, he chose to spend his 20s getting drunk in grotty indie venues and speaking rubbish with everyone from Oasis to Tim Westwood. Pete Doherty once tried to throw him out of a speeding car onto the M25 and he has made up for his meagre salary by dining out on the story ever since

I repeat: Grrr! (nothing I say should ever be taken seriously)
Edit: Their #1 album of the decade: The Streets – Original Pirate Material. I rest my case!

I remember a review of Frank I once read by some British music critic. He said it was so bad that he threw the CD into a trash can on his way home.

I understand that musical tastes vary, but sometimes it's clear that it's the critic who belongs in the trash can, not the work of art.

I remember a review of Frank I once read by some British music critic. He said it was so bad that he threw the CD into a trash can on his way home.