Amy and what turns off men...

Here's what turns off men

...ok, it's not much of a news, but hey...it's pretty quiet nowadays in Amy's worldLOL

Forget wearing bright lipstick or false eyelashes, for a new study reveals that they are big turn-offs for men. The research showed that men tend to prefer girls who stayed natural.
One in five men wished his partner would tone down the slap-on while one in ten said he liked women who wear no make-up at all.
The findings showed that men don't like false eyelashes, bright lipstick, Amy Winehouse-style eyeliner 'flicks', dark lip-liner and pencilled-in eyebrows. Even thick layers of foundation were one of the biggest turn-offs.
Gloopy mascara and panda eyes caused by leaving make-up on overnight were also hailed as no-no by men.
"For many guys, makeup can act as a barrier between them and their partner, and it seems they simply prefer their women to go natural," the Telegraph quoted a spokesman for skincare experts St Ives, who carried out the research as saying.
"But it's interesting to see that the majority of men were reluctant to admit this to their partner. This seems to be part of a bigger issue between the genders as many women also admitted they weren't happy with their skin condition. So it would appear that women are wearing makeup to hide bad skin, not simply to impress the opposite sex. If women felt more confident that their skin was in good condition they wouldn't need to wear so much make-up to cover up," he added.
While 15 per cent admitted they wouldn't dream of walking out of the front door without make-up, 39 per cent claimed they dreaded their husband or boyfriend seeing them before they have applied their make-up.
Top make-up turn offs:
1. Lipstick on teeth
2. Too much blusher
3. Thick foundation
4. Panda eyes
5. Clumpy mascara
6. Bright lipstick
7. Foundation tide mark around the jaw-line
8. Bright blue eyeshadow
9. Penciled-in eyebrows
10. Amy Winehouse-style eyeliner flicks

My turn-offs: Boney thighs; Fake boobs; Getting kicked in the nuts.
But I like fancy makeup with fancy outfits for special occasions. And I like Amy's warpaint because she's a special case - very very special!

The special case checking her warpaint... 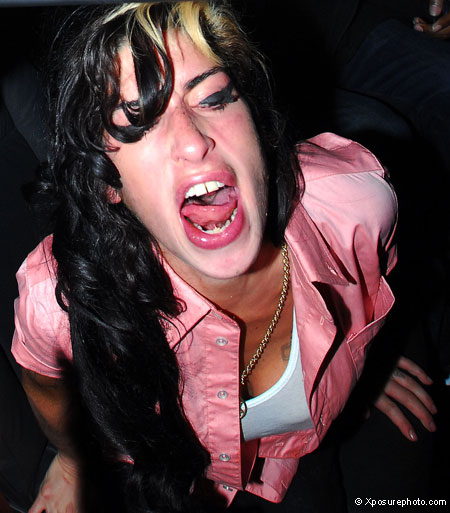 and then peace broke out... or rather, an armistice, with those.....

Amy Winehouse died, and she's taken a part of my soul with her. May that part be the love that I felt for her, and may the love that I still feel for her be the undying part of us both.
Back to Archive