Me and my record collection: interview by Peter Robertson (2004) (Audio + Article)

Hi everyone. I came across one very interesting and rare gem. This is a decent interview where Amy speaks about her favorite records at that time. She gave this interview on phone in 2004 and it also been published in some magazine (I couldn't figure out which) and features incredible unseen Amy picture. I saved the audio and also uploaded on YouTube.  Please enjoy.

Me and my record collection: Amy Winehouse

The music of Amy Winehouse has been classified as jazz, hip-hop, R&B and soul. It's not surprising, considering the 20-year-old's taste in music. ''I'm a fascist when it comes to music'', she says. ''I don't have broad taste and i don't listen to any pop, folk or country. i listen to groove-led beat-driven stuff. ''Amy, who earned two Brit nominations for her debut album Frank, has lived in Camden in her two-bedroom maisonette for a year. ''I must have about 400 CDs and 40 vinyl records,'' she says. ''I'm not really a vinyl collector, I'm a real CD girl. The 10 here are the 10 I keep having to replace.''
1. MOS DEF
Black On Both Side (1999)
This is a wicked album. I love all the tracks. Although it came five years ago, it's timeless. When I bought it, that was it for me. I saw Bilal perform in New York and Mos Def was there. I shook his hand, — it was February 25, 2003.
2. BUSTA RHYMES
When Disaster Strikes (2002)
I love Busta — he's fucking amazing. This is his second album and my favourite. He carries energy you don't see in other musicians and is one of the most innovative people in hip-hop — a pioneer.
3. SARAH VAUGHAN
Sarah Vaughan (1954)
I don't know how I first came across Sarah Vaughan; she's just always been there. She's been a massive influence on me. My top singers are her, Dinah Washington and Minnie Ripperton. I like this album because she does a rendition of Lullaby Of Birdland that I think is beautiful, and April In Paris is amazing — she sings ''What have you done to my heart?'' and it's followed by a piano solo which sounds just like a heart working.
4. LAURYN HILL
The Miseducation Of Lauryn Hill (1994)
To Zion is such a special song that I've only heard it three times because I don't want to over-hear it. I'm very lucky to be a young lady of a time when we've not only had Lauryn Hill's album in our consciousness but we've grown up with it at a crucial point in our mental growth. I loved her work with The Fugees, too.
5. MISSY ELLIOTT
Da Real World (2001)
I like Missy's new album but I really like this one. It was through this album that me and my friends knew who she was. I was hooked straight away — she's inspirational. I met Missy once and she was everything I hoped she'd be — a tiny but a beautiful person.
6. DE LA SOUL
AOI: Bionix (2001)
I really like this, particularly Baby Phat and Special which they did with Elizabeth Bingham. I love De La Soul's thing; their freshness. They've never had a negative stance on anything; they've always had a positive, fresh perspective.
7. DONNY HATHAWAY
Donny Hathaway Live (1972)
His music has been part of my life for a long time. This has so much soul. We're Still Friends is one of the best break-up songs ever written. I know he committed suicide but his music still says more than anything about his life.
8. DINAH WASHINGTON
Swingin' Miss D (1957)
She did this with Quincy Jones when he was really young and cute. There are some wicked songs. She was a blues singer who sang jazz, and every song she sang she made her own. From that I take a lot.
9. SALT-N-PEPA
Very Necessary (1993)
I was about 10 when this came out, and this was the first Salt-N-Pepa stuff I knew except Push It. Then my best friend and I were in a band called Sweet-N-Sour, which sounds like we were taking the piss, but we took it very seriously and wrote our own songs because we couldn't do it better than them. I played this album so much I killed it.
10. SOWETO KINCH
Conversations With The Unseen (2003)
If you surround yourself with decent musicians, you get to hear about all the others and that's how I came to know about Soweto. I used to be into Duke Ellington, but this has replaced him in my life. Soweto is a young musician so ahead of his time it's ridiculous. He's also a friend. Femi, his guitarist from this album, plays in my band.
Source: https://shows.acast....house-interview 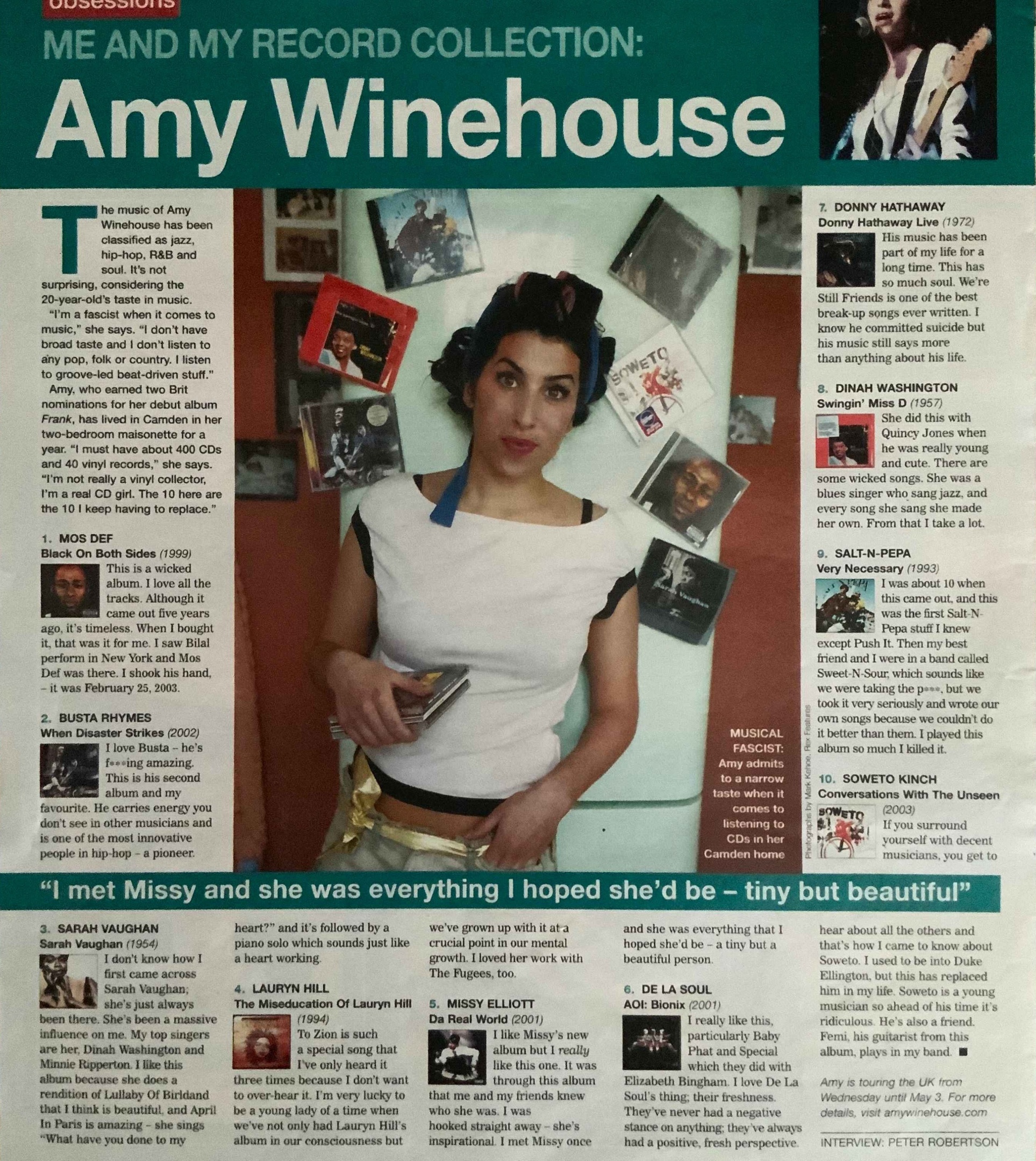 WOW an interview I've never heard. All of these records are also among my favorites.